This is an ATM (automated teller machine) stamp. You go into the post office, pay the fee to mail your letter/package, and the machine prints out a stamp with the amount of the fee automatically printed on it. Most collectors don't bother with these stamps because they're automated -- the print run is limited only by the number of blank stickers you've got sitting around, and there is no set value. Sometimes, as in Portugal a few years back, there were some pre-printed values you could pick up, but you could get a custom value as well.

In Argentina, these stickers have changed in design over time. According to Ateeme.net, there have been 8 different designs of these stamps since July 1998 since the current set of machines went into use. The first five designs featured a barcode on the bottom of the stamp. In early 2008, the bar codes were removed and replaced with a small line of numbers. This freed up space so that another message could be printed there if so desired.

In August 2010 the postal service ran some test messages in this area, followed by the first country-wide message on these labels in September 2010. It read, "DETENER LA DISCRIMINACION es clave en la prevencion del VIH" (Stopping discrimination is key to HIV prevention). This message was printed from early September 3, 2010 until December 5, 2010 and were intended to appear on the sun-background design pictured above. The sun-background design is #8 of the varying ATM labels.

During this process, for an unknown reason postal services occasionally loaded older designs of these labels into their machines. The end result were rare variants on this stamp.

I do not own either of these variants in my personal collection, but I have at least found images of them. 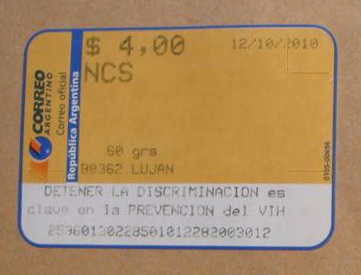 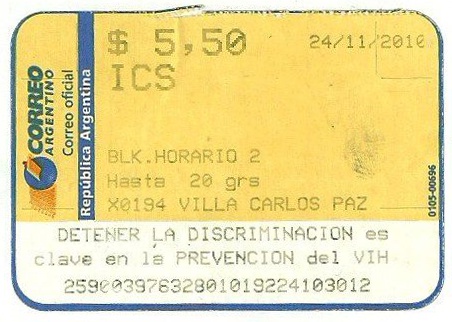 The above two pictures are the same design -- #3. 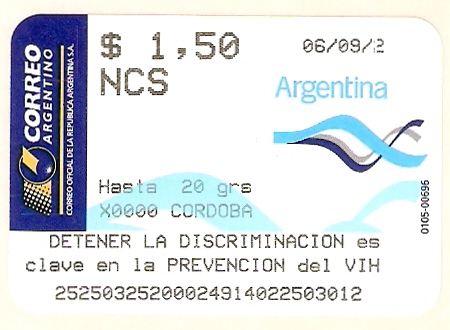 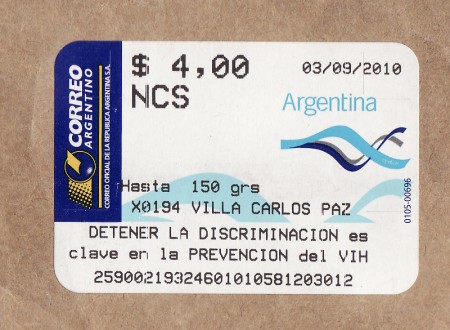 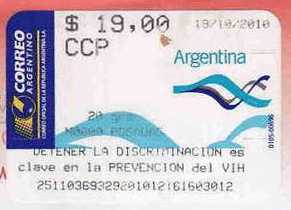 These three stamps are design #7.

So to sum up -- the "standard" version is the most common -- design #8 featuring the sun on a white background. Copies do exist in mint condition, the only design that has been verified in mint condition. Variants with designs #3 and 7 are known to exist. While not common, they are obtainable for your collection. There are no known AIDS labels using designs #1, 2, 4, 5, and 6. It's possible they may exist though, so I will keep watching for them.

This is part of a five-stamp sheet honoring the Girl Guides (similar to the Girl Scouts).